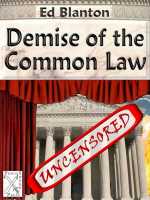 Demise of the Common Law

Demise of the Common Law evidences a simple truth: As goes the legal profession, so goes a nation’s legislatures, it’s laws and its moral fiber. Just check into ex-Senators John Edwards or Jon Corzine. Just take note of the financial holocaust of 2008.

Ed Blanton, a seasoned lawyer and political kingmaker, known among Republican Party insiders as El Consigliori, has written a memoir focused on the follies that, decade after decade, have snaked in and transformed America’s legal profession into being less about law and more about litigation; the made-in-court solution for destroying your adversary. And, this ethos of perfidy has carried over into American politics.

As a political insider, Ed Blanton ruthlessly recounts the degenerative metamorphosis of America from a morally courageous generation into one where “rugged individualism” means the pursuit of profit by any means and one which knows not the concept of “moral hazard.”

Lawyers, legislators and “loopholes,” the art of degeneracy have made it so.

In the Year 2008 and beyond, this truth of historical decadence was amply proven inside a “modern day capitalist economy” where the number of husband-wife dual-worker households that now live paycheck to paycheck tripled in less than one year. No “Joe the Plumber” political flip-flopping can alter this truth.

This new America of “Collectivist Capitalism” in the “Bankshevik” millennium is also one where a coddled “Royal Monetarchy,” a cabal of aristocrats by any other name, pull Keynesian economic levers and deploy political corruption and graft to make record profits from “special-interest” US Treasury and Federal Reserve handouts that masquerade as “bailouts for corporate citizens a Soviet-styled governmental elite deem too fat to fail.”

Ed Blanton provides a first-hand, insider account about the causes of this corruption, the forces behind it and the special interests for whom political graft is essential to maintaining the profits of “rugged corporate individualism.” An America where the current average return on investment for every $1 in corporate lobbying yields $216 by way of “special-interest tax relief.” Record profit equals record tax relief, legislative hooliganism and legal gimmickry; all masquerading as “intrepid entrepreneurial capitalism.”

Demise of the Common Law puts on display the legal environment that has paved the way for all this tactical deceit to come to pass. In short, for decay to set in, all it takes is for men of good conscience to do nothing.

Ed confesses: He could have done more.